The Bullet Journal is an organized note-taking/to-do list hybrid ‘for those who feel there are few platforms as powerful as the blank paper page.’

Amen. From filing away snippets of data to doodles to sparks of inspiration, journaling is a creatives’ ally. But scattered thoughts, quotes and notes can get messy. Sure, the internet is flooded with how-to-be more-productive-articles like this, this and this. And frankly, we were getting tired of all this outside advice, until we met the Bullet Journal. 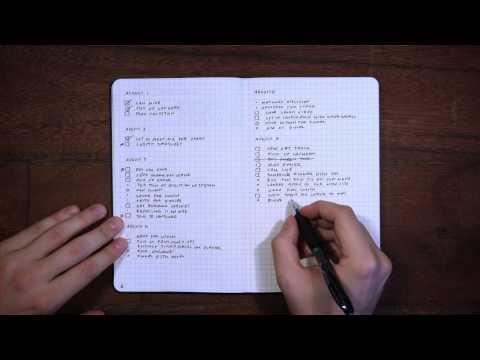 Still not sure? Here’s inspiration to push your journaling forward from one of my favorite passages in Joan Didion’s Slouching Towards Bethlehem highlighting the importance of keeping a journal and the inspiration it yields:

“Why did I write it down? In order to remember, of course, but exactly what was it I wanted to remember? How much of it actually happened? Did any of it? Why do I keep a notebook at all? It is easy to deceive oneself on all those scores. The impulse to write things down is a peculiarly compulsive one, inexplicable to those who do not share it, useful only accidentally, only secondarily, in the way that any compulsion tries to justify itself. I suppose that it begins or does not begin in the cradle. Although I have felt compelled to write things down since I was five years old, I doubt that my daughter ever will, for she is a singularly blessed and accepting child, delighted with life exactly as life presents itself to her, unafraid to go to sleep and unafraid to wake up. Keepers of private notebooks are a different breed altogether, lonely and resistant rearrangers of things, anxious malcontents, children afflicted apparently at birth with some presentiment of loss.

I sometimes delude myself about why I keep a notebook, imagine that some thrifty virtue derives from preserving everything observed. See enough and write it down, I tell myself, and then some morning when the world seems drained of wonder, some day when I am only going through the motions of doing what I am supposed to do, which is write — on that bankrupt morning I will simply open my notebook and there it will all be, a forgotten account with accumulated interest, paid passage back to the world out there: dialogue overheard in hotels and elevators and at the hat-check counter in Pavillon (one middle-aged man shows his hat check to another and says, ‘That’s my old football number’); impressions of Bettina Aptheker and Benjamin Sonnenberg and Teddy (‘Mr. Acapulco’) Stauffer; careful aperçus about tennis bums and failed fashion models and Greek shipping heiresses, one of whom taught me a significant lesson (a lesson I could have learned from F. Scott Fitzgerald, but perhaps we all must meet the very rich for ourselves) by asking, when I arrived to interview her in her orchid-filled sitting room on the second day of a paralyzing New York blizzard, whether it was snowing outside. I imagine, in other words, that the notebook is about other people. But of course it is not. I have no real business with what one stranger said to another at the hat-check, counter in Pavillon; in fact I suspect that the line ‘That’s my old football number’ touched not my own imagination at all, but merely some memory of something once read, probably ‘The Eighty-Yard Run.’ Nor is my concern with a woman in a dirty crepe-de-Chine wrapper in a Wilmington bar. My stake is always, of course, in the unmentioned girl in the plaid silk dress. Remember what it was to be me: that is always the point.”

See more tips and tricks on the Bullet Journal here.