“We only ever own something once we give it away.”

Isn’t it true. And more than just an inspiring quote, it’s the pathos of The Giving Keys.

Founder, Caitlin Crosby, is an artist with a vision for a better world. Her story to CEO is one based upon a sharing economy + spreading the message of Love, Hope, Strength and Gratefulness–something we all could use a reminder of now and then.

The idea behind The Giving Keys is simple: A word engraved on a key, attached to a necklace. Once you’ve embraced its message, pay it forward to someone who needs it. But its story, like all those since the companies inception, is heartfelt, inspiring and triumphant. 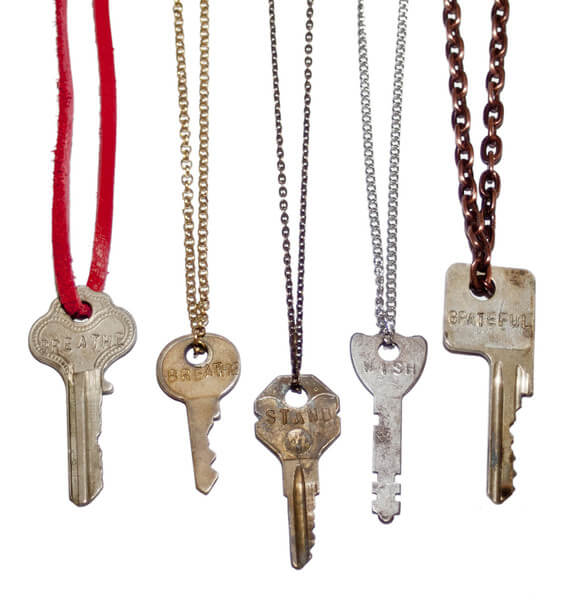 It all began on tour (yes, she’s a talented singer/songwriter as well) with a unique NYC hotel room key–certainly not the modern plastic ones. Attracted to its beauty, she held onto the key, and when she returned to LA, she had it engraved at her local locksmith. Wanting to engrave Love Your Flawz, in tribute to her photo project, it couldn’t fit. Instead, she shortened it and to say Love. Caitlin found a chain to match, wore the key + embraced its message. 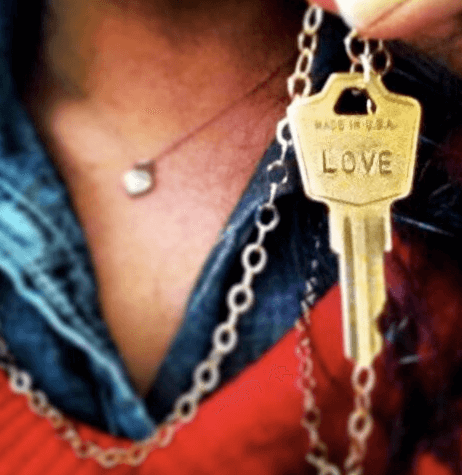 A few weeks later, crunched for time on her way to a friends birthday party she decided to give her key-necklace to the birthday girl, passing on her story and the message of love along with it. She then began collecting + engraving keys with different messages, giving them to friends she felt needed those words.

On tour again, she began selling the Giving Keys, and every night they sold out. Caitlin knew there was strong demand, but still felt a missing link in the story.

Until one night in Hollywood, after a viewing of the heart-wrenching film, the Invisible Children, Fate, Destiny or Pure Magic have it, Caitlin found the answer. As she walked out of the movie crying + feeling like she needed to do more, across the street she noticed a couple holding up a sign that read, “Ugly, Broke & Hungry.” She began talking with them, asking about their story. Caitlin took the couple out for dinner and after wine, steaks and good conversation, she commented on the woman’s necklace. The woman had made it herself, and said she loved to make jewelry. A light bulb illuminated above Caitlin’s head and the Giving Key was solidified. The couple would help Caitlin create the keys, giving them an independent livelihood and purpose. Today, the couple has now saved up enough money to move into an apartment, go back to school and get back on their feet. Since then, The Giving Keys now employs a dozen homeless individuals from the streets of LA, and many have gotten off the streets just from the sales of the keys. 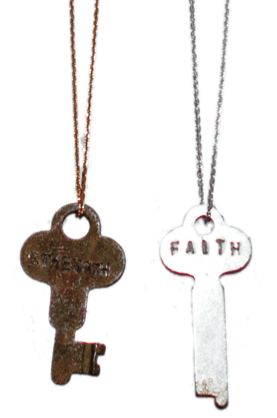 Inspired yet? This is just one story. The Giving Keys collects dozens of stories each day of keys given and received around the world.

As each key is one of a kind, it mirrors the individuality of every person and their story. Be inspired to evolved and share your message, either with a friend of stranger, passing along a word of support for a more giving community.

Get your key here. 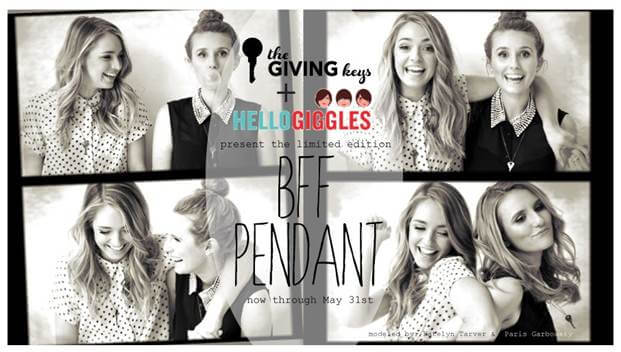